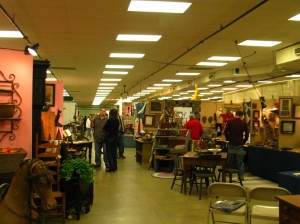 Antiques at Music Valley had a totally different feel than the Heart of the Country Show. The State Fairgrounds provides ample yet unassuming space for the show. Neither show would be mistaken by visitors for the shows as high-end as the Winter Antiques Show in which “price upon request” in some cases means “price you dare ask”; yet the presentation at the Antiques in Music Valley was more low-key than Heart of Country.

The response from sampled dealers were mostly positive. Jeff from Riverview Antiques, Marietta, Ohio said it was his best show in the recent years. Ted of American Spirit Antiques from Kansas City, Missouri said while no furniture transaction had been made (we talked approximately one hour before the end of the show), overall it had been very good with some paintings and weathervanes sales. (But another dealer told us he had sold many pieces of tiger-maple furniture.) David & Carroll Swope from Canton, Ohio told us that while many items were sold in their booth, those tended to be small items. “It is an OK show for us. But OK is the new norm now,” commented Carroll Swope.

Although the show has great variety, Americana had a strong presence. There are a lot of country-looking furniture, textile, porcelain, silver, and even more weathervanes that one could have imagined. Jeff Baker, an appraiser who attended the appraisal conference also held on Gaylord Opryland Hotel, praised it to be the place to shop. We could not agree with it more. 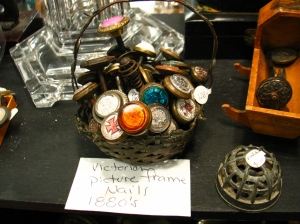 A group of young ladies were fascinated by a small basket full of picture nails used in Victorian parlors. Most were glass head nails where the head is threaded on a nail or screw. The same dealer also had vintage Christmas decorations and antiques door knobs and curtain tiebacks. Items like these are quite popular with younger generations – they do not change the essence of home décor yet add just a magic touch of age and individuality.

The sale of an antiques rocking horse from Bettiane Sweeney in the Heart of the Country Show prompted me to look at these items with a new-found interest. Antique toys can hardly be used in-situ as they are less likely to pass safety regulations. And that bothered me previously when thinking of stripping off functionality for the sake of decorative purpose only. But I begin to understand the collectors in this field have more reason to enjoy the treasures. How many of the current electronic toys will be preserved in future? These antiques toys serve as an anecdote of our material past when toys are meant for physical interaction with unique forms and designs. Another rocking horse in the show caught my eyes. It was displayed prominently at the end of an aisle. Too bad my cats will only scratch it.

Thomas Rawson from Cedar Rapids, Iowa gave us some information about several shows in the mid-west, including what he termed THE antiques show in Iowa. Regarding a painting attributed to “Fred Strang,” which depicts an urban roof-top scene in the vein of Ashcan school, he told us that of the three paintings that he saw from another dealer, only that one was not signed by the artist. Yet he stiuck to his hunch and bought it for its quality. “That could be New York State or even Pittsburgh, “ he commented on the grayish sky blended with many chimneys, all painted with succinct brush strokes.

Eric saw an antique wine opener with a black cat on the top. Knowing that anything with a blade (regardless how sharp it is) may be confiscated by the TSA staff in the airport, he only asked to take a look out of curiosity. It was surprisingly heavy, made of solid brass. The asking price is $750. “Maybe when I have a bottle of wine that’s worth seven hundred dollars,” Eric commented. “Well, then. You will not open it!” replied by the dealer.

If a $750 wine-opener may sound an astonishing sum, then it shocked us when we went to the café for a brief rest and food. Antiques shoppers tend not to care too much about food offered at the show, especially when the show is at such a sheer size that spans three different buildings. A penny saved is a penny earned, as long as it is not spent in antiques. Yet three dollars and 50 cents for medium-sized soft-drink with no-refill policy made the most horrific dining experience. Eric carried the unfinished cup of root beer in the show, joking “I can’t throw it away, it’s priced like wine.”