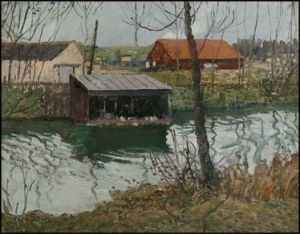 It has been circulated for a while that Spanierman Gallery, one of the leading gallries in New York City specializing 19th and early 20th century American Art, will change its business model to embrace modern and contemporary completely. Although the Doyle Auction catalog has been out for a few weeks, which features paintings from the gallery, it is only today that Ira Spanierman sent a letter explaining his move and what would be on the market.

I still remember vividly during a visit to the gallery,  I saw some customer was taken into a show room with adjustable lighting for a painting by Aaron Gorson, a painter specializing romanticized Pittsburgh industrial night scenes. I was, at that time, fascinated by a painting by Ryder. According to the sales person, there were 10,000 paintings in the inventory. I would imagine a noticeable proportion of its inventory focuses on 19th and 20th century American Art. Those 30 paintings on Nov 13 sale could be just the tip of an iceberg.

Here is the letter from the gallery:

When I opened the Ira Spanierman Gallery over a half century ago, there was little knowledge of, or respect for, American art of the nineteenth and early twentieth century. In the years that followed, the gallery was at the center of a burgeoning movement in which American artists received serious attention in the scholarly and commercial worlds alike. I am proud that our research, exhibitions, and publications were part of this great accomplishment.

As many of you know, in the last few years, the gallery has become recognized as a leading showcase for modern and contemporary American art, especially in the areas of Abstract Expressionism and Color Field painting. I am excited to be investing my time in this new area that has already been very rewarding. In the light of our new direction, we have made the momentous decision to consign the gallery’s American nineteenth- and early twentieth-century holdings to Doyle New York. The auction house will be including works from the Spanierman Gallery, LLC, Collection of American Art in its sales over the next couple of years. However, honoring our tradition, we will still exhibit and offer the nineteenth- and early twentieth-century work that is continually consigned to us.

The initial offering at Doyle New York of thirty paintings will be in a featured section of the American Art sale on Tuesday, November 13, 2012. Below is one of the paintings that will be included. This information is also available on the website of Doyle New York. A second group of thirty-six works will be included in Doyle’s November 19, 2012 auction of nineteenth-century American paintings. Future sales will present hundreds of examples of the art that has earned the gallery its reputation as a leader in the field for over fifty years. Please check  Spanierman.com and Doyle New York often for information on upcoming sales. Doyle New York’s Director of American Art, Anne Cohen DePietro, formerly Director of Spanierman Gallery at East Hampton, is coordinating the upcoming auctions of the gallery’s collection at Doyle. The prices for the works will be reasonable and enticing, and we wish you good luck with these wonderful opportunities.

One thought on “Spanierman Goes All Modern and Contemporary”