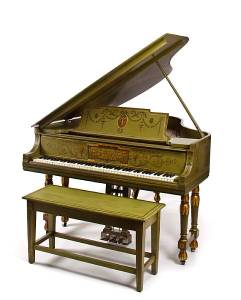 It has become a tradition for us to combine the trips to Bonhams and Spanierman Gallery together. During Americana week, Bonhams had an American and English Furniture & Decorative Arts sale and Maritime Painting & Decorative Arts sale. The best, in our mind, were displayed in the lobby of the lower level.

A grand Steinway Art Case Model M piano (lot 1126) made in 1918 has an amazing painted surface, possibly done by Robert Benvenuti. The goose grass green is not my favorite color for pianos, but it looks artsy and the color helps scale down the masculinity design. In the auction catalog, it says that the piano was commissioned and painted decoration designed by and owned by Henry Blank of Glen Ridge, New Jersey, a survivor of the RMS Titanic. I “accidentally” pressed one white key, producing a crisp note. Although it seems pianos, in general, don’t do so well at auction, this particular one was sold for $18,300 (including buyer’s premium) – a testament for a customized Steinway. 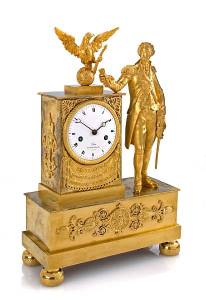 The Porter Family Washington Memorial Clock greeted every visitor walking downstairs. Signed by Jean-Baptists Dubuc, rue Michel-le-Compte, No 22, A Paris, it is a fine example of the smaller of the two basic versions of the memorial clock.

A curious feature of these smaller clocks is the eulogy cast into the drapery below the dial, which paraphrases the famous quotation “First in war, First in Peace, First in the Hearts of his Countrymen” from Henry Lee’s “Funeral Oration on the Death of General Washington.”

To me, the figure does not resemble Washington at all – at least not the Gilbert Stuart’s Washington; but the French maker’s probably didn’t care, nor did the winning bid seem to mind. (What the figure is less than important than who he is.) The item was sold for $51,240 including buyer’s premium.

To our disappointment, a group of green Fitzhugh Chinese export porcelain was withdrawn from the sale. 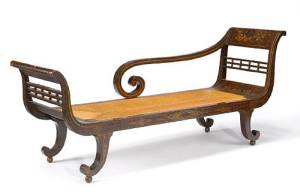 We spent quite some time with a Federal faux rosewood and gilt stencil decorated Recamier (lot 1124). Lacking some brass inlaid, this fancy Recamier looks rather folkish. The remaining paint on the arm shows excellent workmanship although certain area cries for paint stabilization. Interestingly, such New York furniture came from a California estate and now was shipped back to New York for its next home. We would love to have it, if we had the budget, space and capability for the shipment to Texas. The item failed to sell based on the Bonham’s sale result webpage.

The last lot (lot 1324) was a gigantic Victorian mahogany table with concentric extension. In fact, the table can be extended twice by two sets of crescent shaped leaves. It boasts a 102 inches (or eight and half feet) long diameter at its full length. I would have some difficulty to hear the voice from the other side of the table, but someone didn’t mind. It brought $46,360. 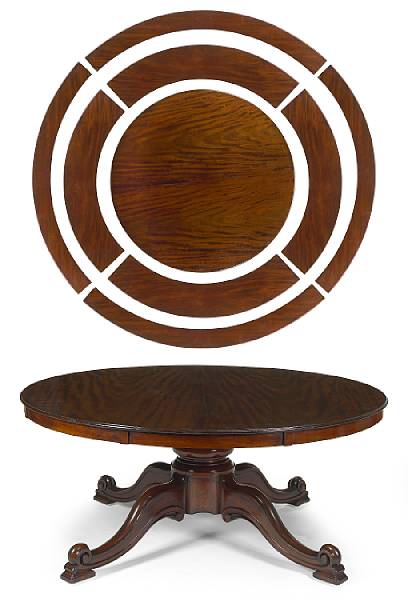 At Spanierman, “In the Tonalist Mood” started its opening reception with a book signing event by David A. Cleveland, author of A History of American Tonalism: 1880-1920. The book has been called “an indispensable reference for museums, galleries, collectors, artists and academics, covering fifty artists, with more than three hundred color plates and many never-before-published works.”  However, such a thorough reference (nearly 600 pages) has surprisingly very few works from art institutions.

It may reflect the fact that unlike Hudson River School or Luminism School in which best works are owned by major museums, great examples of American tonalism works are still abundant in private hands. American museums have been lukewarm toward this particular school popular in the gilded age. I can only recall two major exhibitions in the past: American Art in the Barbizon Mood organized by the Smithsonian Museum of American Art and The Color of Mood: American Tonalism, 1880-1910 from De Young Museum, both of which happened in the 1970’s.

But perhaps the inclusion of many paintings from New York Galleries into a book whose publishing date is delayed by nearly two years has also a financial incentive. Spanierman Gallery is famous in sponsoring such scholarly efforts in cataloguing and raisonne projects. After all, what would better improve the provenance (thus market value) of a painting than putting the picture into THE reference book of the school?

Spanierman and Questroyal enjoy the lion’s share in the book with respect to the number of paintings listed, aligned with other galleries such as Hawthrone Fine Art. Here in the current exhibition, the gallery has specially labeled those paintings which can be found in the book, as if they are trophy works championed by the only judge in the field.

The most impressive painting hanging in the Spanierman Galleries is by Edward Simmons, which hangs on the far end of the hall way. If tonalist painters can be roughly divided into two groups: those following the path of pastoral beauty with rich glazing (Inness, Wyant, Ranger) and those following the path of oriental aesthetics, urban focus, with minimalistic composition (Whistler, Harrison, Dabo), then Simmons “Moonlight on St. Ives Bay” is the tour de force of the latter style.

Although Simmons was one of the Ten American Painters with eminent figures such as Tarbell, Hassam and Weir, his works indicated that he never fully embraced the Impressionism movement, also evidenced in his move from Sunny Brittany of France to moody Cornwall of England. Although The St. Lawrence from the Citadel/Quebec by Birge Harrison also features a similar composition (flattened surface and a high horizon), it is the restrains in layered muted tone and its seemingly casually composed humanized nature that achieve the sense of harmony, quintessential of the tonalism school.

A Stag and Two Does by Albert Pinkham Ryder was painted on gilded leather on canvas, then mounted on board. The leather seems to be more forgiven to Ryder’s conservator-nightmare painting style and also harmonizes the whole picture with a stunning golden tone. Perhaps less heavy impasto (or more scrapping than layering in some area) also helps prevent it from developing extreme craquelure, like the two paintings by Ryder we saw in December’s American Paintings Sale at Chrstie’s (neither was sold in the auction).

It looks surreal with that warm tone. The three deer, centered against a formless tree, defy any attempt to pursue their story. I was drawn into it immediately and could not move for a long time. Only in front of Ryder’s paintings do I always first capture the graceful composure of the main subject through curves and convex forms. Yet just like the deer, the pictures remain mysterious about what they are, as if there is a greater force behind, driving us from the sensual common ground into a more metaphysical realm, in which we think more than look.

Two Bruce Crane’s paintings in the gallery showed typical artistic growth for most of the tonalism artists. The first one, sharply focused, with the most vibrant green in the gallery, was painted in the 1880’s, The other one – “Late Fall”, was painted a quarter century later. The heavy impasto in the latter work seems to be capable of transforming the haze into weighty form. The airy perspective has given in to the decaying nature. I saw nothing particular, at least nothing particular in focus, but my mood felt succumbed to the damp and bleak.

The painting also reminded me one of my favorite Bruce Crane’s paintings in the Florence Griswold Museum. It is in fact painted on the door of Ms Florence’s boarding house. “December Morning” features only one single tree, slender and tall, standing barely visible against such dense frosty air that the air feels immediate and accessible yet thick and impenetrable at the same time.

I always remember the anecdote about those door panels. In regarding some request to purchase the door panels (with some of the best tonalism painter’s works), Ms Florence said firmly that the doors came with the house. And when the request persisted with the interest in buying the whole house for the panels, she rebuffed that the house came with her.

I do not see the painting in David Cleveland’s book, unfortunately. Neither are other important paintings in Florence Griswold Museum or other major museums (Metropolitan Museum of Art and Brooklyn Museum both have major tonalism artists works and the Renwick Gallery of the Smithsonian Museum shows Murphy’s work at the front entrance). Instead, that early Crane work is included in the book. So is a painting by Arthur Hoeber, lent from the Hawthone Fine Art Gallery, to make a bookful presentation with justified price tags.

The gallery representative sent me the information about “Late Fall.” It is from private collection with no detailed provenance. Many paintings, in the commercial galleries, do not have unbroken lineage of provenance. Aesthetically, who owned the painting before matters less than the quality of the work; yet from art history point of view, those entered the public domain or collection of prominent collectors at early years shed more light in our understanding of the art movement.

With a wall of beautiful pictures, splendidly illustrated in the companion reference book, I felt nothing as memorable as the one by Ryder.  It was dark when I walked out of the door. The snow just stopped. Still one image climbed into my mind: the bare twig painted on the door of Griswold’s house. The details have faded in my memory, but the thrills from seeing it  the first time, in person, and most of all, in situ, can still be felt, strong and fresh.