Nearly 1,000 people came out to explore and engage with the vintage fashion world March 16 and 17 during the first ever Dallas Vintage Clothing and Jewelry Show. The event, which drew visitors from as far away as Japan and Italy, was held at the Grapevine Convention Center near DFW airport.

“It really was heart-warming to see the support for the show,” says Melissa Sands, co-promoter with Eric Miller. “A lot of people came together in amazing ways to make this happen.”

Chicago-based Sands came with three other dealers from the Windy City. Word quickly spread through the mid-section of the country and Sands is planning to bring several more dealers next time, sharing a large truck filled to the rim with vintage clothing and jewelry.

“The show attracted a relatively young crowd,” says Eric Miller, co-promoter of the show. “Everyone seemed really excited to be there. We engaged a community.” 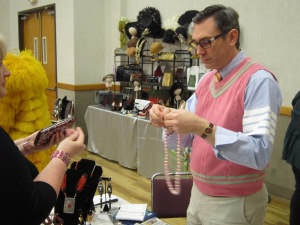 Many of the patrons arrived dressed in vintage attire. Others commented they didn’t expect to find the quality of merchandise they encountered at the show. The show attracted the bulk of patrons from Dallas and the suburbs around Grapevine, plus others from Fort Worth, elsewhere in Texas, other states including Washington and Oklahoma as well as international.

Feedback from the dealers was almost overwhelmingly positive and the most common response to a survey question indicated they were “very likely” to return for the next show. One veteran dealer described it as her best show in a very long time.