If you visit the Dallas Art Fair (April 7-9, FIG Gallery) this week and look down Ross Avenue, you may get a glimpse of a large yellow sculpture by John Henry. If you are intrigued, you may also look forward to a show opening later this month at the Museum of Geometric and MADI Art in Uptown. 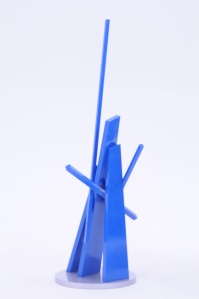 Henry is known worldwide for his large-scale public works of art, which grace numerous museum, corporate, public and private collections. His works are prominently exhibited in many American cities and states as well as throughout Europe and Asia. His work is also visible in the Hall Sculpture Garden in Frisco.

The geometric forms that have defined Henry’s work for more than forty years have their aesthetic and historical base in Constructivism. Henry received a Ford Foundation grant to attend the Art Institute of Chicago, where he earned a BFA. He received an Honorary Doctor of Arts from the University of Kentucky in 1996. He was a founding member of ConStruct, the artist-owned gallery that promoted and organized large-scale sculpture exhibitions throughout the United States.

Some recent exhibitions include: OPEN 2007, Venice, Italy; Sarasota Season of Sculpture 4, Sarasota, FL, 2007; American Sculptors in the Shadow of the Alps, Art St. Urban, Switzerland, 2007; Sculpture a Wyoming Invitational at the University of Wyoming, Laramie, 2008; his one-man exhibition throughout the state of Florida, Drawing in Space: The Peninsula Project, 2008/09, Sculpture for New Orleans, 2009, and Art in the Garden at the San Antonio Botanical Garden, July 2009.

Henry’s exhibit at the Museum of Geometric and MADI Art opens April 28 and runs until July 23. John Henry will be onsite for the Opening and for an Arcadia Salon discussion on May 18 at 6:30 p.m.