If you could only visit one museum in Mexico City, which would it be? That was the question faced when planning our first venture into Mexico City. The first time in any city, save perhaps Detroit, can’t be a museum trip. This is especially true when the trip is only three days. But travels wouldn’t be complete without coming away with some sense of the art of a place.

Which museum to visit would have been a hard choice, but some recent news made the decision easier. Dr. Agustín Arteaga, the director of Mexico City’s Museo Nacional de Arte will become the director of the Dallas Museum of Art. A national museum is probably a good choice anyway, but this news gave support to the choice. It will be nice to know his most recent point of reference.

Housed in what I was told is a former mansion (which I can’t imagine living in), we felt the visual strain of surrounding architectural eye candy luring us away. Across the street is an attractive post office, and just a block or so further the Palacio de Bellas Artes, the building I most wanted to see in Mexico City. We resisted for now and entered the Museo Nacional de Arte and a special exhibit on art from Brazil.

For me, this may have been one of the two more interesting areas in the museum, here or the landscape paintings on the second floor. Remarkably here I noticed a painting, Eugene Landesio, The Valley of Mexico from the Hill in Tenayo, I had seen before at the Picturing the Americas show at Crystal Bridges in Arkansas. It was included here in Ideal Territory, José María Velasco. Much of the museum is filled up with colonial-era paintings. There was not as much contemporary art, or folk art, ceramics or decorative art as I would have imagined. It is certainly possible, and most likely, I have many misunderstandings of art history in Mexico, but while satisfying, the museum did not seem comprehensive. 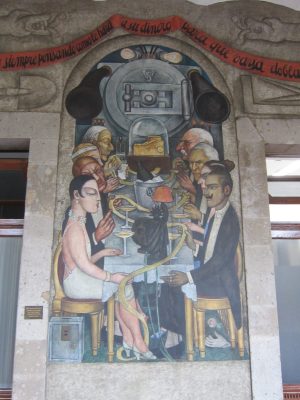 Ok, I lied. We didn’t just go to one museum. The Museo Mural Diego Rivera was also a stop. And this is after seeing the amazing Rivera murals at the Education building (Secretaria de Educacion Publica). It’s almost unbelievable they are outdoors. I read two conservators were employed and working year-round to keep the murals intact! Hungry for more murals, the Museo Mural Diego Rivera houses a masterpiece rescued from a nearby hotel destroyed in a 1985 earthquake.

There are so many additional museums to visit in Mexico City that I really look forward to a trip focused on just that. Most people visiting from the U.S. would have probably headed for the Museo Frida Kahlo before the National Museum or the Diego Rivera Mural Museum (I almost think she is the better-known artist from Mexico now, at least in the United States). There’s also Museo Tamayo, Museo Soumaya and Museo de Arte Popular many others.

Oh, and that crack about Detroit–I imagine I may be as misinformed as I was about Mexico City before having first-hand knowledge. In fact, this article in the New York Times makes a comparison between the two.

There is always a lot to learn. That makes life interesting.