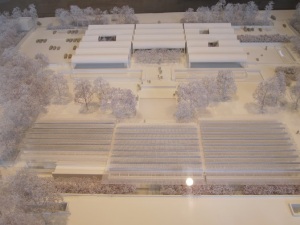 Forty years is long, for human’s life. Yet for art institutions, it’s like a blink. The British Museum was founded in 1753. Forty years later came the Louvre. The American art museums, like the nation itself, are much younger in comparison. The oldest public art museum, the Wadsworth Atheneum, was established in 1844. Although it sounds counter-intuitive, the Fort Worth Modern, founded in 1892 as the Carnegie Library and Art Gallery, was, in fact, the first art institute of the town. Now, the Kimbell Art Museum, at 40, is celebrating the process of collecting with the largest ever installation from its permanent collection.

The story of collecting is never boring. In the past, the Kimbell Art Museum has been rather aggressive and willing to take risks in their acquisition strategy. For example, neither Caravaggio’s Cardsharps nor Michelangelo’s Torment of Saint Anthony had firm attributions when the museum made the bid. These anecdotes, unfortunately, are not elaborated on in the exhibition labels.

Caravaggio’s Cardsharps has served as source of inspiration for other artists to explore emotions and human nature in card playing; yet in 1987 skepticism was round about whether the picture was THE cardsharps by the master. Only through conservation at the museum did the support become insurmountable. The broken history of provenance was re-established through the seal of Cardinal del Monte, an early patronage of Caravaggio.

Similarly, when Michelangelo’s Torment of Saint Anthony was displayed in the single painting exhibition at the Met after Kimbell’s acquisition, much of the exhibition content focused on the attribution process and evidence such as the fish scale or the cross hatching on the rocks. The infrared picture of significant modification in underdrawing eventually proves it not a mere copy, but a carefully crafted original composition. The Met got in first to examine the painting, but it was Kimbell’s patience that paid off. They struck the deal promptly with cash ready at hand (believed to exceed six million dollars) when others had already emptied their bank accounts for the budget year.

Poussin’s Sacrement of Ordination, acquired last year, went through a different ordeal. For months, the British government had tried to block its extradition. It finally gave in after no British museums could raise enough funds to match a price tag of more than 24 million dollars. And when the Kimbell revealed itself as the buyer, the British were puzzled that it was Kimbell, not the Getty that acquired the painting. (In fact, among art institutions which are managed largely by founding foundations, the Kimbell has the second largest endowment, only after the Getty.)

It should be noted that the Kimbell started with some three hundred objects in the 1960’s and the total number in the collection has not bulged that much after four decades’ acquisitions. The untold story of de-accessioning is less concerning than that of other public institutions with financial woes. A few remaining paintings from Kimbell family’s initial collection are on display on the left side of the reception desk. They would have looked less appealing had they been hung in the main galleries. The distinction marks the difference between a family and a foundation, the latter of which, through decades of curatorial efforts, wanes out the former’s affinity to British art and female portraiture.

Thus, with patience, luck and deep pockets, the Kimbell, like an experienced collector, expanded gradually. “Buy the best that you can afford” or “quality over quantity” has always been the tenets for any devoted smart collector. It may take years for someone to realize the most difficult thing for strategic collecting is to conquer the impetuous desire of owning things and balance between rational analysis and indescribable human intuition on fleeting opportunities. The Kimbell, through the guidance of a roster of top curators and scholars, established similar policy early on, to seek works of art of “the highest possible aesthetic quality” as determined by condition, rarity, importance, suitability, and communicative powers.

Yet, no matter how disciplined the collecting has been executed, what is seen in an exhibition is and will always be a collective of objects. The emphasis here should be collective. The 220 or so objects, out of 350 in Kimbell’s inventory, are displayed through the South and North wing of Louis Kahn’s building, in strict chronological order of their acquisition dates. The scope of Kimbell’s collecting interests is comprehensive and encyclopedic. Except American Art, which has been excluded early on through the mutual agreement with the neighboring Amon Carter Museum, almost every expressive form of human civilization have found their ways into the collection.  Unfortunately, what and when notably high-quality works were available or will be available in the art market, could and would never be arranged in a systematic order. Thus it is havoc to see them — once and together.

We have been pampered by thematic harmony of museum exhibitions. When such inter-object connections or curatorial insights are gone, the art appreciation goes astray. Or more precisely our brains’ working mode in visual analysis, instead of building upon continuum, cold starts at every object, like a car that must be restarted every block.

Richard Brown, the former director of the Kimbell said “the goal shall be definitive excellence, not size of collection.” True, but this is Texas, size matters. Had the collection had 3,500 objects instead of 350, the exhibition would have been easier to comprehend. It is a body of works by a single hand or within a single school, instead of singular ones, that help define connoisseurship. Our visual memory lapses. The physical proximity of works within a narrow range of consistent style is the key. Without that we cannot accumulate enough visual impression to understand nuances and subtlety.

To some extent, the Kimbell is experiencing adolescent anxiety with too much to express out of too little experience. The result is like a melting pot of assorted ethnic cuisines, rejuvenating your bodily senses at first, but upsetting your stomach in the end.

Yet at the same time, the Kimbell is growing out of its own clothes. Mr. Brown’s insistence on achieving a sense of intimacy through a residential scale like the Frick, where he had worked before, leads to such growing pains arriving much earlier than anticipated. There has been no precedent for any art institutions that no guilt or remorse was found for scaled down or uncompleted initial plans. Had the 450-feet-wide plan in Kahn’s initial scheme been accepted, arranging special exhibitions would have been much easier. Currently, all gallery space (with movable dividing walls) at the Kimbell is used for displaying just two thirds of its permanent collection.  Thus, the show implicitly justifies the desperate need of additional space that can accommodate arts of “definite excellence” out of their storage rooms.

Logically, the space next to the other side of the reception desk is reserved to showcase the future models of the Kimbell expansion and video of construction progress. If the Kimbell is the crown jewel among Kahn’s legacy, Renzo Piano, with his extensive resume in museum architecture (including the Menil collections in Houston, Nasher Sculpture Garden in Dallas, the Morgan Library and the new wing at the Art Institute of Chicago) would at least uphold the selection standard of the museum (for both art and architects).

Yet Piano’s design is anything but Kahn. The new wing, once open in 2014, will bring a drastic contrast across the lawn – the rectilinear vs. the curvilinear, the glass vs. limestone, the airy vs. the solid. The result, again, like the show, is a melting pot of assorted excellencies, going awry.