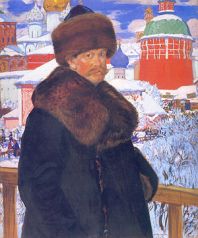 A judge in England recently ruled a painting purchased for more than $2.6 million from Christie’s in London is a fake. Christie’s must pay Russian billionaire buyer Viktor Vekselberg the $2.6 million, plus $2.2 million in damages, according to the Daily Telegraph. Originally thought to be painted by Boris Kustodiev, the signature was allegedly made with aluminum based pigment available only after the artist’s death in 1927. The work had been described in the 2005 sale catalogue as “one of the best examples of Kustodiev’s idea of the provincial merchant class.” It was said to have displayed the inscription “B. Kustodiev – 1919.”

Image: Boris Kustodiev- This self-portrait from 1912 from Wikipedia is not the painting in question.