As I was browsing through an antique mall of sorts in Dallas called Dolly Python, it occurred to me that we think more about when a certain technology was invented, but not much about whether we may arrive at a point when it is no longer with us. We have not reached that point with photography, but it may be approaching. The photographs I was looking at were likely from the 1950s, had been taken with a camera and printed on photographic paper. I noticed several copies of a few photographs, and these may have been printed in duplicate in order to give one to a friend.

Moments previously, I noticed a curious bottle that once contained embalming fluid. Aside from where the contents may now be, it was curious because in my mind the “100 percent pure chemicals” was juxtaposed with some of today’s sales slogans, say “100 percent organic.” I took the photo with Instagram, which allows it to be shared with a pre-determined list of folks on the app or Facebook. This photo will not be found in an antique mall in the future.

The Instagram icon on my phone shows an image of an old camera and recalls the brand of camera called Instamatic made by Kodak. The idea is the same,  creating a photo that is both immediate and easy to share. Today we take that photo with a phone, however, and it’s most likely never printed.

This is all after the long debate over digital images vs. film. Purists once left to wring their hands over whether images stored on a computer could be preserved as long as a paper print are now left with the notion that photographs are forgotten hours after they have reached their immediate intended audience.  In theory, a digital image can last infinitely longer. Chances are however we’ll never stumble upon it again.

In some sense photography, at least as we thought of it in the 1950s when the photos now arranged in the antique mall were taken, has ceased to exist, or could in the very near future. This is happening to other mediums as well, mediums once seen as permanent, like television, newspaper and radio. 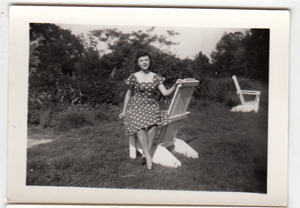 It’s not necessarily all bad news. I think the prevalence and immediacy of phone photography like that of Instagram will take serious photography up a notch. Sure, artists will begin to print and otherwise use the phone photos, but not for love of the artistic quality of the medium. At least not the same way as a photographer artistically manipulates a camera. The new realm of photography, to me anyway, is more about instant amusement. (Not to say that art can’t be about instant amusement). The paper photos that are left from our times won’t likely be available for the equivalent of 50 cents. There will be far fewer of them, and the ones that do exist will have been more carefully composed.

Until then remember that, just because a technology exists now doesn’t mean it won’t one day be forgotten. Just because there is a new technology doesn’t mean you can’t continue to use an old one. The world is big and diverse, and as artists, we can choose our tools from as wide an array as exists, not just among what’s presented to us as the next thing.