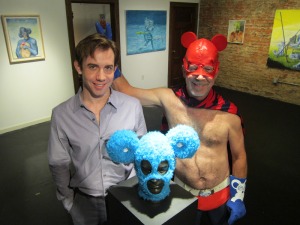 The first question of a visitor who enters T. J. Griffin’s current exhibition “Remove Your Mask,” at Ro2 Downtown Gallery, is naturally about the title: what are the identities that have been masked?

Pictures of burly grown men with masks and costumes, often set in a fantasy world, fill the room with a kind of queerness. The artist found most models from photos online. Many are portrayed with a direct look that invites viewers to look through their masks. If masks were removed, they might be figurative paintings of everyday Americans. Middle-aged, slightly bald, with a gut buldging from too many burgers and drinks, they speak of the opposite of American grandiosity and heroism.

This multi-faceted dichotomy prevails in the show. On the surface, viewers are forced to reconcile what they are wearing with who they are. The ambiguity of true identity not only has perpetually perplexed Peter Parker and other heroes in comic books, but also provides room for viewers reading into their own reflection.

The show is also a paradox between revelation through social-consciousness and personal struggles and an objectified nothingness toward visual pleasure. In the former, the artist forays into human conditions of denial and aversion. By wearing a super-hero costume, one should have instantly seized victory from the world and claimed the kingdom of self, as we may all have dreamed or experienced from childhood. Yet the drooping eye bags, the sagging muscles and bellies bring down the heroic optimism to the ground. In the latter, there permeates a lightness and humor, either in the heart-shape-eyed animals or big paws that each figure inherits from the costume. The kind of superficiality has the tendency to negate possibility of intellectual reading. The addition with a real beefy actor dressed in a  costume in a room with old batman TV shows running helped further to stress the entertaining side of the exhibition.

The duality of social connotation through animated lightness may not attract collectors that tend to favor either end, but not a mixture of both. (Consider the tastes for appreciating Francis Bacon would be far apart from those who loves Murakami.) The artist, however, said he would rather paint what he likes, than what pleases others. For this series, he has taken one year off from his Ph.D program in Aesthetics Study at UT Dallas. The results are a group of 18 paintings and a few pieces of sculpture works that together project a totemic power of masks in transforming and revealing ones’ true identities.

Two self-portraits bookend the exhibition. “Secrete of Hidden Identity” was the inspirational work of the series. The artist posed in a green frog-type costume and reclined in a Windsor chair reading a book with the same title. Except a few sculpture pieces, “Identity Soldier” was the latest one in the series, in which the artist held a water gun against the door of a spare room with stark furniture. They are slightly different from the rest of the series: Both are relatively small, inviting a more intimate reading; and both are set in a realistic domestic interior. One can imagine these are the brooding moments that border between reality and fantasy. Yet with the same humbleness, the paintings carry more weight in examining the imperative of American individualism by throwing away the vivacity of the dream world.

Yet it is in the dream world that paintings of this series are narrated with ridiculous fecundity of imagination. It was technically challenging as all the artists had were a bunch of photos of mature man, mostly naked. He not only painted them over a world with alien flora and fauna, but also occasionally changed their poses to accommodate the story-telling. Deer man, according to the artist, was one of the earliest in the series. The rather cartoonish looking from dual colors of grey and red downplays the violence nature of the scene: two deer hunters were killed, in particular, one rifle was stuck through the wound caused by the antlers. If the blank white background shows the influence of comic books, its superlative figurative quality recalls the tradition of illustration. Eric’s favorite was “Aqua Man”, a bizarre image of variant aquamarine colors tinted with bright yellow. A man, perhaps in the disguise of a less intimidating Poseidon, sits comfortably in the deep sea bed. (To be honest, he reminds me of my neighbor.) He seems to smile at the sight of a yellow fish. Had he had the authority to reign the real world, would he still be able to maintain calm and amicable?

Still the question persists. What are the identities behind those masks? For me, to remove one’s mask is to reveal the true individualism that has been gradually etched away by the promises of American grandiosity and the form of normality, in the name of individualism. Ironically, the physical masks are the prerequisite of removal of social masks, thus channeling viewers into the mental world of the unknown sitters. With these masks, we truly see these individuals.

One thought on “T.J. Griffin’s ‘Remove Your Mask’ at Ro2 Art Gallery”