Exquisite in craftsmanship, unique in detail, and few in number, lover’s eye miniatures are small-scale portraits of individual eyes set into various forms of jewelry from late 18th- and early 19th-century England. Featuring an impressive 98 pieces, the collection currently on view in Birmingham, Alabama is considered to be the largest of its kind, with only 1,000 lover’s eye miniatures thought to be in existence worldwide.

Part of a trend that began with Britain’s Prince of Wales (later George IV), clandestine lovers exchanged these customized tokens depicting one another’s eyes, as such a feature might only be recognized by persons of the most intimate familiarity. Thus, behind the skilled artistry with which each of these tiny portraits was painted, lie the enchanting stories of secret romance and love lost, which inspired the creation of this popular, albeit short-lived fashion.

The genesis of lover’s eyes is a story of forbidden love. In 1784, the 21-year-old Prince of Wales became smitten with Mrs. Maria Fitzherbert, a Catholic widow. Under the Royal Marriage Act, the Prince could not marry without his father’s consent until the age of 25, and it was highly unlikely that King George III would agree to the heir to the throne marrying a Catholic widow. Mrs. Fitzherbert initially rebuffed the Prince’s advances, but after he staged a suicide attempt to demonstrate his despair, she gave in and accepted his proposal.

The following day, she came to her senses and fled to the Continent, remaining there for more than a year. She hoped that her absence would quell the Prince’s feelings, but true to the old adage, it only made his heart grow fonder. On November 3, 1785, the Prince wrote to Mrs. Fitzherbert with a second proposal of marriage. Instead of sending an engagement ring, he sent her a picture of his own eye, painted by the miniaturist Richard Cosway, writing, “P.S. I send you a Parcel…and I send you at the same time an Eye, if you have not totally forgotten the whole countenance. I think the likeness will strike you.” Shortly thereafter, Mrs. Fitzherbert returned to England and married the Prince in a secret ceremony on December 15, 1785.

Not long after their clandestine nuptials, Mrs. Fitzherbert (as she preferred to remain) commissioned Cosway to paint a miniature of her own eye for the Prince. The Prince of Wales’ token of affection inspired an aristocratic trend for exchanging eye portraits mounted in a wide variety of settings lasting the next few decades. 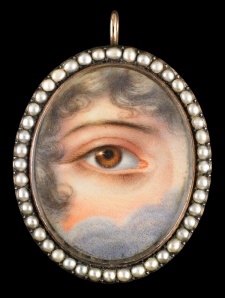 Struck by the splendor of an elegant ring featuring a lover’s eye portrait, Nan and David Skier began their eye miniature collection with this solitary purchase in 1993 at an antiques show. Over the past several years, they have built the largest collection of lover’s eye miniatures in the world.

The collection now contains an array of 98 objects, both decorative and functional, from simple lockets to lavish rings, as well as watch keys and toothpick cases, each of which features an eye miniature. While the majority of the pieces were meant to be worn as jewelry, mainly brooches and pendants, some were intended to be carried on one’s person in the form of small boxes.

While visiting, we were invited to check out an accompanying Ipad program that enhances the visitor’s experience. Join us for a brief tour in this video (above).