The world we live in is often planned, pondered over and reviewed in our dreams while lying still, or sleeping in bed. Such a bed was placed as a nucleus in the new exhibit at RO2 Gallery in downtown Dallas. Around it hung messages of personal motivation and introspection. From there spun the web of this creative individual. The remnants of social interactions branched out into the annals of the gallery.

R Mateo Diago’s exhibits in every then… and now appear to cover the artists interaction with both the virtual and physical world. It all struck me as very relevant to our own conflicted age. 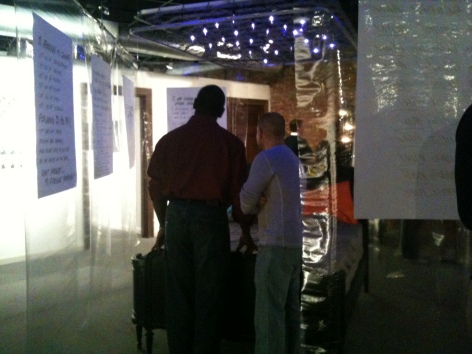 One section of a wall was covered with back-lit replicas of an iPhone. The images on the screen were of interactions with various people on the site known as Grindr, a location-based smart phone program used for gay men to meet. Sometimes things just happen, things that aren’t at all purposeful. A larger back-lit message beside it alerted the user that he had been removed from the site for violating the user agreement.

Another wall showed screenshots from Ichat. Here a conversation with a crazy religious aunt was juxtaposed with one of an atheist friend.

Thoughout the runs a theme of bumble bees and hives, perhaps symbolizing the world built through our interaction with it. A mannequin with a hive where the head should be contains a peep hole and key over the heart. Looking in you see a sink fill of water with a bumble bee on the edge.

Diago also uses found objects. An old dressing table with mirror shows the artist’s bare back with tatoos and hands tied. The drawers are missing, and a number of items, a key, a light bulb, a yo-yo and more, all painted white to contracts the black dresser, lie scattered on the floor.

Finally, three glass domes cover picture cubes hovering over bee hives in three different sizes. Perhaps they relate to the influence of the people in the photos in the artist’s life.

It was just then the gallery became occupied by a number of Santas, one with a bullhorn. Such odd interruptions can sometimes be the natural course of things.

The exhibit runs until January 21 at 110 N. Akard Street 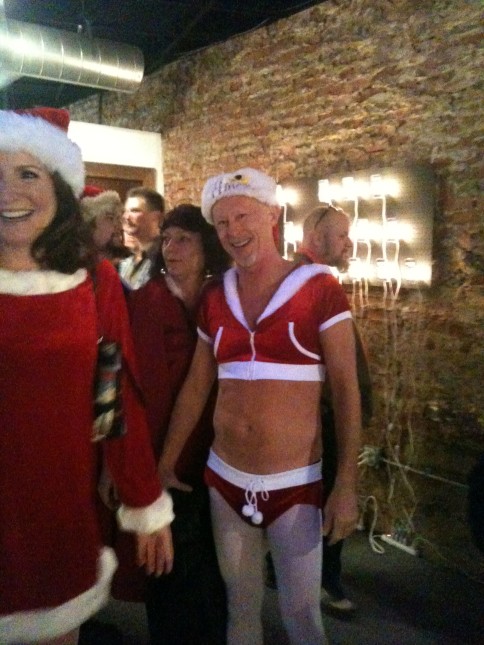 One thought on “Sometimes These Things Happen: The Buzz About Grindr Art, R. Mateo Diago at RO2”