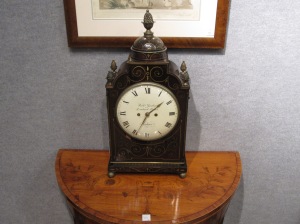 With discussions underway to establish an Antiques Week in the U.S., we thought it would make sense to reach across the pond of some feedback on how Antiques Week has worked in the U.K. The questions are answered by Gail McLeod of National Antiques Week U.K. If you would like to weigh in on when would be a good time for an event in the U.S., take a minute to complete this survey.

Q. How did Antiques Week in the UK get started?

A. From 1998 to 2009 it was National Antiques Day. It was suggested by the various trade associations that we could get more impact from a full week. When it was National Antiques Day it always took place on the same day as an antiques fair, now ceased, organized in conjunction with http://www.lapada.org at Cheltenham Racecourse. It was devised by the forerunner to my publication http://www.antiquesnewsandfairs.co.uk then known as Antiques & Art Independent to raise awareness of the antiques trade and to encourage a younger audience to visit antique shops. Since it has been National Antiques Week it has always taken place at the same time as http://www.olympia-antiques.co.uk in November which is organized in conjunction with LAPADA and http://www.bada.org.

Q. How has it been received?

A. Awareness is increasing gradually over time but we are facing harsh times in the trade and it is not always easy to get people galvanized. This year has been the most successful so far with the Best of British Antiques Awards which has been a simple idea with something for everyone – the public who vote on line have a chance to win one of 12 excellent prizes and the trade have the chance to win the award in their category. See www.nationalantiquesweek.co.uk We have secured a well known homes and interiors tv personality Kirstie Allsopp to present the awards at The Bath Decorative Antiques Fair 8 March 2012. In the meantime we are taking part in judging the shortlist and will announce that last 5 March before the final announcements March 8.

Q. What’s the state of the antiques business in the UK? Are things up or down?

A. We are seeing good business at the very top of the trade and the collectors market seems stable but the middle ground is rocky for the trade. The lack of the American trade business which is what so many dealers depend on, has caused a lot of hardship over here. This with the obvious trends towards vintage, mid century and industrial style away from traditional antiques has caused a major impact.

Q. Do young people go to antiques shows there?

A. This largely depends on the style of the fair – there will always be some young people at all fairs but the main interest of the young market is definitely the vintage scene – this is extremely vibrant with new fairs and events cropping up every month.

Having said that, there are as many general antiques fairs in all categories as there have always been however, this is probably due to the amount of dealers attending who have closed their shops to trade from web sites and who want to meet new client and see existing ones face to face and can now only do this via fairs. The fairs community in UK is on the whole very active and thriving.

Q. Do you think an antiques week in the U.S. should coincide with the UK event? Would this help make it “international?”

A. We would be open to any ideas to increase awareness for the antiques trade via any means! We have a committee of leading media and antiques trade associations who meet three times a year and we are meeting next on 18 January. It would be really interesting to present some ideas to them for 2012.

Q. What are some of the ways dealers and promoters celebrate antiques week?

A. This year was Best of British Antiques Shops including auction houses organized in partnership with http://www.antiquesnewsandfairs.co.uk and http://www.homesandantiques.com (described above). Previous years have been based on on-line competitions to win an antique clock and similar promotions. We have found that a competition will attract public interest. Dealers have in the past offered a variety of incentives: free valuations, late opening with wine and nibbles, combining with Christmas events, competitions in house, talks from visiting professional speakers, etc.

Q. Was there any seed money to get it started, or did it happen organically?

A. All the trade associations pay a small sponsorship fee to appear on the web site, also some associated high profile antiques organizations. It is NEVER enough to really do what we would like to do – we have seen the French antiques shops do much better than us with red carpets laid out in streets and big promotions but this costs bigger money and lots of staff time. We are under-funded.

Q. What does the future of antiques in the UK look like and how is antiques week contributing to that?

A. This is a big question which is open to discussion but one clear way ahead is to promote www.antiquesaregreen.org which is a concept that a younger audience can really appreciate. We have seen a number of tv shows supporting this concept – “Cracking Antiques” was a prime time BBC2 show with Mark Hill  who is on our committee and works hard to support National Antiques Week. Nigel Worboys founded the Antiques are Green movement over here and he has worked hard with our team to produce scientific evidence about the excellent green credentials of antiques vs similar high style furniture and has published the findings on the web site.