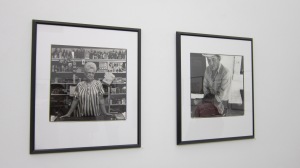 On the night of Nov 19, PDNB Gallery hosted a book signing event for Keith Carter. A quarter century has passed since the first print of the book “From Uncertain to Blue”, the almost incessant visitor-line proves that the book provides freshness to new readers like me, or still resonates with those who have seen those pictures before.

Unlike Robert Frank, who took a Guggenheim scholarship for his road trip to searching for the meaning of “The American,” Keith Carter’s work is more accidental. The photograph series started from a 10-year-wedding-anniversary trip of small Texas towns that were picked by the couple simply because of their interesting names – Fairy, Uncertain, Paradise, Welcome, and Blue. It would have been totally uninspiring and perhaps wearisome for someone who expects scenerios that match the names, but Keith has an uncanny capability to present something ordinary, extraordinarily beautiful and poetic. If it is the excitement of an alien in a foreign land that provided unique angles in Robert Frank’s road trip photos, here it is the familiarity (the artist’s family moved to Texas from Madison, Wisconsin when he was three years old) that brought the depth and candidness to the photo series. 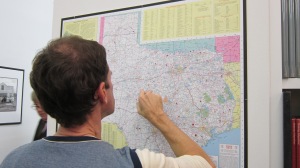 When I asked whether there have been some changes in those small towns seen in two different millenniums, Keith’s reply was surprising. He didn’t talk about the highways, or shopping malls, but spoke of the word “innocence.” That innocent looking, from the people and their towns, becomes a haunting and dictatorial theme of the photographs for the modern viewers. I am not sure whether the artist meant that innocence has been totally lost, through a mere twenty –five- year time span, but the media, the roads, and the internet, for sure have made their marks on the life and destiny of people and their towns recorded in the book.

In the introduction chapter, Carter mentions that he tried not to make association between a photo and its town name. (In the final edition, he only chose one photo for each town that he visited and the title of each photo is simply the name of the town.) A few photos, however, can still be read that perhaps the photographer had the whimsical town name in mind when a peculiar image was taken, such as the sign of a bread store for the town Comfort; but mostly he succeeded in capturing just the “normality” with no hint of the quirky names.

At Bebe, the gas-station/grocery store owner and postmistress stood in front of her bottle collection. Those ordinary bottles are now probably piled up in some soon-to-closed antiques store. Her overbearing neatness, through details such as her blonde back-combed beehive hair and the striped blouse, is incongruently presented against an array of every one-of-the-kind bottles on the shelves. It reminded me of my childhood in China when you knew the name and the temperament of the owner of the unnamed corner store. A quick search on Google shows that there is a Wal-Mart within 10 miles of Bebe — That’s probably where the locals shop now.

At Oatmeal, a forlorn theatre was captured in quietude. Local advertisement took so much space of the curtain that the staging background looked out of place. The come and go of small town stories happen everywhere, but the harshness of Texas perhaps has withered some before they could even flourish. I searched a few business names including “W.F. LaFarge Hardware, In Business for 14 Years,” noting that all the chairs were facing away from the stage (directly toward viewers), made it surreal.

In fact, for most photographs featuring single or double portraits, Carter has often chosen the ones with direct eye contact among many studies. More often than not, the livings, when isolated in the vast rugged land, find their peculiar ways to form a harmonious relationship with the nature and a tighter and stronger sense of community. Looking through them as a whole series, I felt touched by the homogeneity of the humanized lands, the self-sustained happiness, mellowness of main streets before there is a main street and the Waldoian internal strength under a hot sun.

It also occurred to me that the traditional film has given black and white photos an elegiac tone. The fuzziness through enlarged particles understates the narrative but projects poetry. Scott Hilton, a photograph artist who led a group of his students at University of Texas at Arlington to display a mobile photo exhibition (which was essentially a container towed by a truck) just outside of PDNB, suggested the seductive visual qualities of the chemical film. (Scott himself shoots tin-type photos.) The richness in grayness and layers of intensity engenders film photographs a particular degree of depth that defies the kind of immediacy associated with photography, especially digital photography. The fact that these prints were handheld and manually treated by someone from some negative film rolls echoes the loss of innocence in photography itself.

When we left the gallery, Eric and I both commented how magnificent those portraiture photos were. After all, the gigantic size of the land, the eccentric names, the crude geological characters and the harsh climate have stereotyped Texas as a land of insensitivity and silliness; but in his book, Carter captured individuality who all shares the common ordinariness. These individuals, leaving scarcity and remoteness behind, hold steady and calm in front of the cameras, show the kind of affections and belongings that we all long for. In this way, they were magnificent.