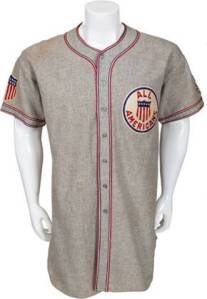 A grouping of six items, known as The Lou Gehrig Collection, brought to auction by the son of a woman who was left the trove by Gehrig’s mother, Christina, brought almost $1 million altogether as the emotional centerpiece of Heritage Auctions’ Aug. 4 Signature® Vintage Sports Collectibles Platinum Auction.

The lead lot of the group was Gehrig’s previously-unknown 1934 Tour of Japan game worn uniform, which realized $507,875. All prices include 19.5% Buyer’s Premium.

“The chances of a group of material like this, so intimately related to one of the greatest sportsmen to ever live, turning up together all at once,” said Chris Ivy, Director of Sports Auctions at Heritage, “is akin in the sports collecting world to finding a stack of Picasso paintings in the art world.”

The tone of the evening became apparent with the very first lot, as a baseball autographed by the 1926 New York Yankees opened at $30,000 before skyrocketing to the world-record price realized of $131,450, the highest figure ever paid at auction for a team sphere.

It was the first of six lots representing the highlights of the recently unearthed Lou Gehrig Collection, as mentioned above, which continued to draw gasps with each subsequent drop of the auctioneer’s gavel. Besides the 1926 ball and legendary first baseman’s 1934 Tour of Japan uniform, which commanded a live bidding frenzy on its way to the aforementioned $507,875 price realized, Gehrig’s matching cap from the 1934 Japanese tour, sold separately, added another $95,600 to the tally, while the American League Championship wristwatch presented to the Iron Horse for his service to the 1926 Yankees notched a remarkable $155,350.