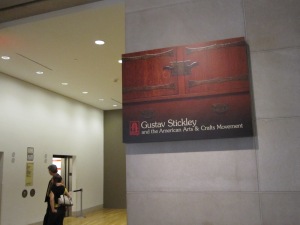 Furniture maker Duncan Phyfe can’t seem to secure a special exhibition at the Met (a show which had been scheduled for January, 2010 got the recession axe), but Gustauv Stickley has taken the stage at the Dallas Museum of Art. The show opened February 13th and on my initial visit a few days ago seems to have secured an interested, informed and young audience.

The exhibit is very well presented and shows both individual pieces and their use in room settings in addition to presenting the design for some of the homes they were designed for. The exhibit also presents information about the industry and crafting of the products.

There’s much to be said about the furniture, especially as it is compared to that produced in modern day. Still, I have to say its more about design and the production process than it is about art. But even this criticism, if that’s what it is, can be dissected.

Let’s briefly compare the process from a piece made in 1800 with one made in the Stickley era. A cabinetmaker in 1800 would have worked in a small-scale shop. Goods were often made to order with a customer choosing some specifics of a design. The basic design likely came from a stylebook. The cabinetmaker might have hired a carver to complete the feet or other decoration. Inlay patterns and brass may have been purchased elsewhere. Few pieces are identical.

Once in a while a cabinetmaker, such as Duncan Phyfe or say Anthony Quervelle, might have broken the mold and made designs recognizable as his own or “from the shop of.” 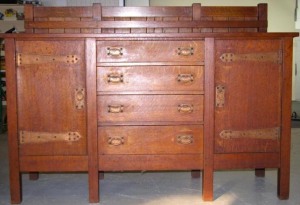 Now in 1900 we have the likes of Stickley coming up with a design, creating patterns to standardise the process and then mass-producing it in a factory setting. I guess they criticized Andy Warhol for as much, but in looking at a sideboard/hutch at the show I couldn’t help but notice the oak grain on the cabinet doors was very different. One had a very striped pattern and the other was almost uniformly dark. I couldn’t help thinking back to the carefully matched “flamed” mahogany on my own circa 1825 New York sideboard and thinking that the “craftsman” on the Stickley sideboard was implementing, but not really looking, or dare I might say acting in the roles an artist might.

I’m not sure what it is, but there’s something about our modern psyche that likes things that are produced through a modern production cycle. We learn about that process through our childhood toys and then later look for it elsewhere. We like the concepts of design and mass-production. Sure, Stickley was looking back to an era of hand-crafted quality and then making that readily available by churning it out of factories. Other factories with leaner methods would later supplant him.

If you like the Stickley look, there is a wealth of items available at auction that have been attributed to Stickley. I don’t often see furniture of this era at antiques shows and I don’t have enough information to provide an accurate assessment of current demand. There’s little doubt it falls into the “brown furniture” category and so I would guess demand may be at a low. Having an affinity for brown furniture myself, I can’t think of a better situation than low prices on the things I like. Plus there’s a chance good exhibitions like this can help turn the corner in the marketplace.

I do however notice there’s a disconnect between the stuff we see in museums and what we bring into our homes. Because it is in a museum, we may think of it as unobtainable. Many times this is not the case. So if you go, learn and then look. Whether you like Stickley or Duncan Phyfe, doesn’t matter as much. A search for either and bringing antiques into your home can enrich your living environment and artistic experience.

About the Exhibition: Gustav Stickley and the American Arts & Crafts Movement offers the first comprehensive examination of the life and work of the recognized patriarch of the American Arts & Crafts movement, Gustav Stickley. The exhibition and accompanying catalogue explore Stickley as a business leader and design proselytizer, whose body of work included furnishings, architectural and interior designs, and related imagery that became synonymous with the movement that was at its height between approximately 1880 and 1910. This exhibition includes more than 100 works produced by Stickley’s designers and workshops, including furniture, metalwork, lighting, and textiles, along with drawings and related designs. Also featured in the exhibition is a re-creation of Stickley’s seminal model dining room from his 1903 Syracuse Arts & Crafts exhibition.