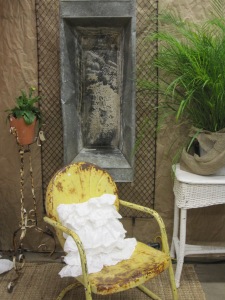 As the saying goes, rust never sleeps. It sure does seem to be selling, at least this year at the Dolly Johnson Antiques Show. “I’m finding traditional just isn’t moving,” one attendee who stopped by my booth at the show told me. He has a booth at the popular antique mall called Found in Dallas. He says it’s been that way for about a year. 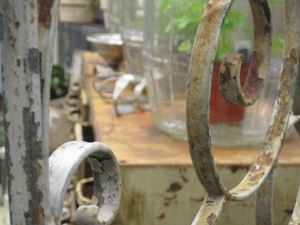 On Friday however one mid-century modernism dealer hadn’t had a sale either. Perhaps the wave of tradition has advanced far enough to swallow up the category of modernism. It would seem the industrial look has taken hold. It’s not just the factory, medical lab or meat storage locker look, however. We can call it stainful metal as opposed to stainless steel.  At least here a number of items one dealer referred to as “things I would have in my back yard with plants on them” moved out the door.

One booth heavy on oxidation seemed much emptier at the end of the day Friday. Saturday morning brought about a restocking. I was assured that within a year this infatuation will have worked itself out of the system. In the case of the industrial look, I too expect that to pass. But this infatuation with weathered metal seems ingrained into the North Central Texas psyche. It’s a curious phenomena it must have co-existed for some time with that high-French look that took center stage just prior to my arrival in the Lone Star State. 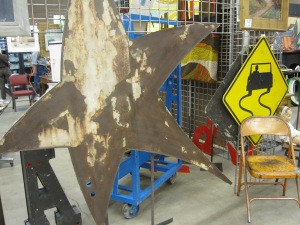 The traditional-looking landscapes and genre paintings didn’t draw much attention, except for the admirers of technique, or those who found some personal relation to the works. I had some success with press coverage for the works of Georg Arnold Grabone and a number of native German speakers stopped by to admire the works and boast about their native land. The pride stayed in the purse, however.

For those like me, it may take some time for the traditional look to return. But return it will–gilt doesn’t rust. I guess it does sleep on occasion.