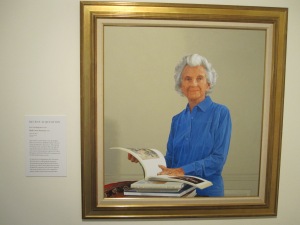 On the way in to preview what is likely a once in a lifetime opportunity to see masterworks from the New York Historical Society in Fort Worth, I noticed a portrait of Amon Carter by portrait artist Scott Gentling had been moved. Adjacent to it now hangs a portrait of Ruth Carter Stevenson by the artist. It seems appropriate given her contribution to the museum as it stands today.

According to a Star-Telegram article from earlier this year, “the Remingtons and Russells had been collected by her father, the museum’s famous namesake, but almost every other piece was either selected or approved for purchase by Stevenson herself.”

The portrait artist died earlier this month at the age of 68.

If you haven’t been to the Amon Carter in a while, it’s a particularly good time to go. In celebration of the Amon Carter’s 50th Anniversary, joining the masterworks collected by Amon Carter and Ruth Carter Stevenson is a portion of the permanent collection of the New York Historical Society including Thomas Cole’s Course of Empire. Joining them is Kindred Spirits, a monumental painting which once hung in the New York Public Library but will soon move to its new home in the Crystal Bridges Museum in Bentonville, Arkansas.

The paintings from the New York Historical Society have only left the gallery in New York on one or two occasions previously and are only making rounds to a select number of destinations now because the facility in New York is being renovated. On November 11, 2011, or if you prefer 11/11/11, the Course of Empire will be back in the Empire City and Kindred Spirits will be at home in Arkansas. 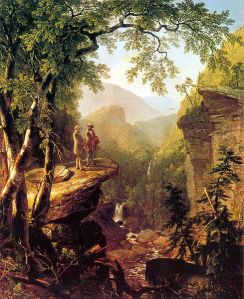 Ferber presented the paintings as beautiful artwork, but also as historical documents. more than any other form of art, referring to this not as art and history, but in terms of production and reception. We often talk about art in terms of history, but sometimes intentionally or unintentionally indicate the history is somehow secondary to the art. Ferber’s terms make sense and serve to elevate the history. “Production” in this case refers to the artist and the activity of creating art. “Reception” refers to how the artwork was received by the patrons and the public, and that’s the important part to social history.

In those terms there’s a lot to be learned from these paintings and knowing something about the reception improves our appreciation of them as objects of beauty. The attitude toward nature in 19th Century America is one aspect. Ferber says landscape paintings reached the greatest number of citizens at the time, more than any other genre.

Then there are the historical specifics of the paintings. Durand’s Kindred Spirits for example was created as a memorial to Thomas Cole. It shows Cole and poet William Cullen Bryant communing in the Catskills. Ferber points out that while Cole and Bryant are often discussed in relation to the painting, it was Durand who created the scene. 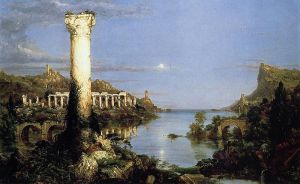 It’s also important not to discount the role of patrons.

Specifically mentioning Cole’s dislike of cities (this brought to mind Frank Lloyd Wright), Ferber notes Cole couldn’t have excelled without them. Cities were necessary both for the patrons and their sources of wealth, but for his art supplies.

Kindred Spirits was commissioned by New York art collector Jonathan Sturges as a gift to Bryant. Its title was inspired by John Keats’ Sonnet to Solitude. Bryant’s daughter Julia donated the painting to the New York Public Library in 1904.

Lawton notes the paintings are arranged in the galleries as an American Grand Tour, beginning in New York and moving up the Hudson River. At the other end of the exhibition is Cole’s Course of Empire. Ferber notes one of the five paintings titled Destruction has taken on a whole new set of receptive notions following the events of September 11, 2001. While Grand Tours in America focused on natural wonders, it’s worth noting here that Grand Tours in Europe often involved viewing ruins of civilizations which had reached the Desolation stage, shown in the fifth painting in Cole’s series.

When the works were completed, the story of the rise and fall of great empires was well-known, the question was if a Christian Democratic Republic could avoid the same conclusions, or as we say today, be sustainable.

These are questions that are likely to linger beyond our own time, as will the greatness of these works. Our moments are fleeting and we are lucky not only to have this collection of masterworks spending time in Texas, but displayed here with Kindred Spirits.