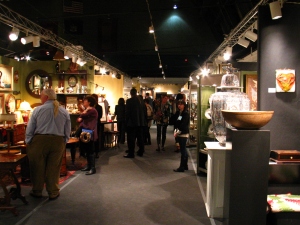 On the first morning of the Antiques at the Armory show at 26th Street and Park Avenue, the crowd seemed undeterred by another snowfall the night before. Unlike the American Antiques Show presented by the American Folk Art Museum, in which most dealers came from Pennsylvania, New York, Connecticut area; or the Winter Antiques Show, in which you expect to see the same dealers year after year like a warm reunion on the coldest days, visitors can see new faces in the show, not to mention the great variety ans surprise in merchandise. It is perhaps for this reason that the visitors on that frigid Friday morning were also diversified, and we are happy to report that we were probably NOT the youngest visitors this time.

No shows in Americana Week beat the variety of merchandise offered in the Winter Antiques Show, in which artifacts across different continents, and millenniums of time are graciously presented. Yet it is in Antiques at the Armory that most visitors can find interesting items at a more comfortable price range. There are high-end such as a York County Dower Chest asking for more than 60 grand, but there are also items which cost less than a meal at nearby restaurants (hey it’s New York, there are some pricy restaurants). 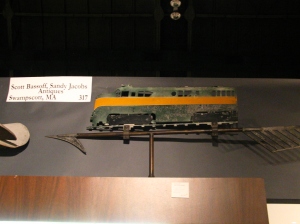 Americana has a great presence in the show as one can expect. The funny part is that there is a weather-vane waiting for you regardless of your preference or hobby.If you think eagles, horses or roosters are common, then check Scott Bassoff and Sandy Jacobs Antiques’ booth. The diesel engine part of the train, with its bright yellow stripe,  shows a distinct 50’s style. If trains are still too mundane, what about an airplane? Chuck White Folk Art & Antiques from Warwick, NY will for sure attract collectors who also love flying. On the side note, it is a rather chunky artifact, and perhaps unlike politicians, won’t steer under the wind. I am no expert in airplane models. But this weather-vane does resemble the special custom-made Spirit of St. Louis flown by Charles Linbergh in 1927.

Furniture also has a strong presence in the show. Eric and David were fascinated by a China cupboard offered by Donard Heller and Kimberly Washam from Maine. The overall pristine red paint over pine in contrast with tiger maple columns and feet has an understated beauty and warmth. David Sokosh commented that Colonial and Federal furniture, and even those colonial revival furniture may provide a cure to the young generations who are tired of everyday products uniformly cold and inhuman. Yet for him, the consummate craftsmanship evidenced in deep carvings of Philadelphia highboy is too showy. In these folkish, country furniture the simplistic form and utilitarian functionality find the right balance. Eric pointed out that except the lesser-quality wood, this cupboard has rather an ambitious design and bold patterns. Even if it was made for a country taste, it was a developed taste at that.

Traditional and trendy items go along with each other to cater different types of customers. Three types of chairs were picked by three of us respectively in the show. A rosewood American Classical chair, offered by Cunha ~St. John, has unusual brass inlaid through out the front legs, seat/top rails and stiles. But overall its grand gesture plus beautiful red fabric make it an easy fit for most formal living rooms. Eric commented it maybe even too fancy for regular home purpose and could be designed for offices of high-ranking officials. Then a pair of Victorian chairs with their new Martha-Stuart-type color made us wonder the nature of re-purposing. Between a fanciful form and the original brownish finishing, which part would more likely turn Gen X away? Does the disregard for original condition make matter less these days that stylistically individual and cool?

Just as you think maroon-orange is too much a statement, here came a real surprise: A chair made of radiator pipes. David still held his opinion firm and gave a positive review: It may look cold and uncomfortable; but you know you can simply connect to the heater and it will heat up in winter. With some cushion, it can be a bliss.

As usual, we did tour the show twice, each of which had a different walking direction. Our second tour inevitably included the sign booth of Victor Weinblatt from South Hadley, MA. I could hardly imagine that one would consider those antique signs with some funky lines have values beyond their decorative purpose. Yet here they were treated like pop art in decorative field before Warhol was born. Would it be too cocky if I hang the sign saying “Stud service Tel. 2120”  in my living room? I can imagine my guests trying hard to hide their laugh when seeing the sign. Too bad, I said to myself, they don’t know, that their laugh is the real punch line.