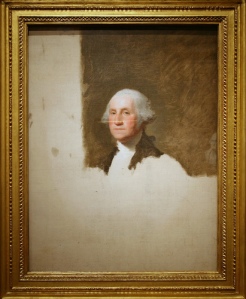 It’s the most reproduced portrait in history. I could have probably guessed as much, but It wasn’t immediately apparent to me that Gilbert Stewart’s Athenaeum Portrait of George Washington could have been considered propaganda. Someone not trained to be as endeared to the paternal figure could have easily surmised as much, however.

I recently read a fascinating article by Adam Greenhalgh published by Winterthur Portfolio, 2007, issue four titled Not a Man but a God that looks into the use of the image during the great depression. The year 1932 heralded the nation’s greatest hero tribute, a nine-month long bicentennial celebration of the birth of Washington. To make a long and fascinating story shorter, the image initially chosen for official purpose was a reproduction of a bust by Jean-Antoine Houdon. The public, however favored Stuart’s portrait. It was this portrait that was most widely reproduced and hung in schoolyards around the U.S.

Most intriguing is the idea as it is presented that the portraits made their way into the homes of Catholics in America and hung along side images of Saints and other icons. The author notes that Polish Catholics in America numbered among the most enthusiastic celebrants of the birthday. “The Athenaeum portrait of Washington,” Greenhalgh says “it would appear, was incorporated almost seamlessly into a mode of ritualized presentation and ceremonial display common to Catholicism but quite alien to traditional Protestant worship.” Moreover he says,the Catholic packaging of Washington may have been employed as a strategy for “naturalizing” the Catholic population.

And here we don’t even celebrate Washington’s birthday as a national holiday anymore. How can we expect cohesion? (that’s said in jest, but you know the saying, there’s truth in it.)

I had the privilege of seeing the portrait at the Smithsonian Museum of American Art when it was on display there last year. It was commissioned by Martha Washington, but Stuart never turned it over and never completed it. He did however put the portrait to good use himself-he would copy it many times. In fact these copies amount to a significant portion of his output for more than 30 years. It’s presence on the one-dollar bill seems appropriate, given the artist himself referred to the copies as his “hundred dollar bills.” It’s said he could knock one out in two hours. He himself went to great lengths to keep others from copying his copies of the Athenaeum portrait.

What does it say that America’s national portrait is at first unfinished and yet has probably been more widely reproduced and has adorned more walls than any other?