News came from Heritage Director of Texas Art Atlee Phillips via Facebook that the long-lost and much talked about The Battle of San Jacinto by Henry McCardle more than tripled estimate to bring $334,600 at November Dallas Signature Art of the American West & Texas Auction on Saturday.  A draftsman for the Confederate Navy, McCardle later served with General Robert E. Lee in his first campaign in West Virginia on the engineer staff.  In the 1880s, he began began painting a new work, The Battle of San Jacinto, which was completed in 1895 and hangs across the room of the Senate chamber at the Texas State Capitol. In 1901, McArdle painted an alternate version of The Battle of San Jacinto which was believed lost by scholars. In his book, Painting Texas History to 1900, Sam Ratcliffe briefly mentions, “a slightly scaled-down (5′ x 7′) version of San Jacinto, which is unlocated.” It remained a mystery until this year when Jon Buell, the artist’s great-great grandson, discovered it in the attic of his family’s home in West Virginia.

It would seem to have many elements that would lead to a successful auction, and the buzz was certainly there. A number of events surrounding the painting offered by Heritage certainly helped things along. If you read the previous post comparing the art market in China and the United States, a follow-up to that may be that several regions within the U.S., of which Texas may be primary, retain a great amount of regional pride and a relatively intact economy. A look at the market for antique maps is another indicator of this. Maps of places people identify strongly with sell well. Texas maps do much better than Pennsylvania maps (people in that state identify with either Philadelphia, Central Pennsylvania or Western Pennsylvania). People in Texas love Texas and are quite proud to call it home. 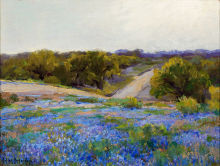 That said, this was an exceptional piece–particularly in historical terms, that comes around perhaps only once in a lifetime. Other items included a painting of blue bonnets by Texas landscape favorite Julian Onderdonk failed to sell. The market for this artist has escalated in recent years and maybe a plateau of sorts has been reached. The painting was estimated at $75,000-$100,000 and is available for purchase at $83,650 including premium. It would seem prices for this New-York trained tonalist turned impressionist painter are somewhat out of whack considering considerably lower prices for other tonalist painters, but that’s the Texas factor. This can also be seen within Onderdonk’s raisonne as an autumn landscape probably painted in the Northeast also failed to sell as is available for $7,170 including premium.

A painting from 1909, the year Julian Onderdonk moved back to Texas did sell at Heritage. Onderdonk came in the fall, and this Spring scene probably depicts a landscape from the Northeast.It brought $8,962.50 with premium. A similar painting from the same year was offered at the THETA show by David Dike Fine Art of Dallas priced at just $10,000–a reasonable price considering the minimal ten percent difference between it and the one that sold at auction and the fact that dealers usually have some room to move on their price.