Each year the biggest auction houses in New York have their American sales. A few months before Antique Week, the events provide a good opportunity not only to see items that may not be on public view again for sometime, and see others before they move through the retail chain.

Saturday provided the opportunity to preview the sales at both Christie’s and Sotheby’s, and enjoy the walk between the two with a stop at the new Ralph Lauren men’s store on Madison Avenue–certainly the leading retailer in terms of decorating with antiques. 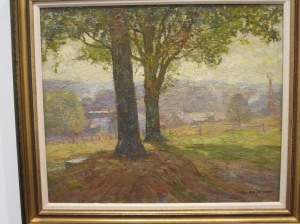 The day began at Christie’s where fine art was given one gallery and furniture, decorative arts and early American paintings were given to another. In need of a water fountain and knowing where it was located, we headed to the painting galleries. A large Hayley Lever painting was the first stop, although the size made it hard to miss. The first painting not in an unavoidable position to lure interest was perhaps a country landscape by N.C. Wyeth. Lot 20, View of Chadds Ford is estimated at $25,000 to $35,000. 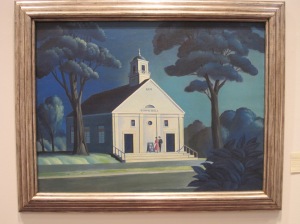 Paired paintings by Dale William Nichols would get us in the mood for early American furniture and art. Town Hall has kind of a Grant Wood look to it, although this school of art from the mid-20th Century has more to do with the heartland than New England or the thirteen colonies. Lot 257 is estimated at $20,000-$30,000.

While we are moving forward in time, mention of a work by Paul Cadmus might be appropriate. Rise and Fall is dated 1989, ten years before his death and estimated at $60,000 to $80,000–towards the higher end of the spectrum in terms of the works in this sale. If you work that out on a square inch basis, the relatively small size, 25 x 10, reinforces the importance of Cadmus and the recent focus on the mid to late 20th Century when looking at the world of people who collect things American. 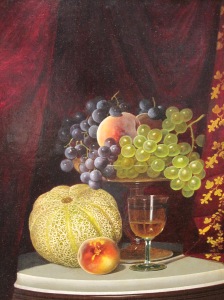 A still life by William Mason Brown was perhaps one of the paintings here most worthy of hanging on museum walls. If there’s one thing that has to be harder to paint than a pineapple, it has to be a cantaloupe. A look at the glass, fabric and marble here and it becomes clear, Brown’s skill is unsurpassed. It’s not fruit we relate best to in 2010, however so despite the skill and quality, this exceptional still life by an important American painter is estimated at $20,000 to $30,000.

In terms of tonalism, there are no works by Wyant or Crane in this year’s auction, and the most appetizing work in this vein is a painting by Samuel Colman. Its unconventional square format makes the whole look very decorative. Lot 2342, Autumn Landscape is also estimated to fetch between $20,000 and $30,000. 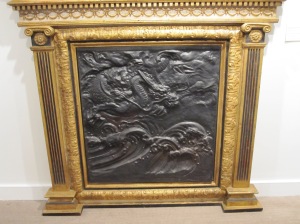 During the labor day weekends, we visited the Baltimore Museum of Art and was surprised to see a fireplace insert with dragon relief designed by the artist Elihu Vedder. Geo commented that it looked Chinese. At Christie, a similar fireplace insert with a frame by Vedder is offered with an estimation between $10,000 and $15,000. His paitings were offered by both auction houses, yet none has the power that equates the dynamics of the pouncing dragon.

A large portrait by Charles Webster Hawthorne was given a prominent spot on the back wall. A masterful work this portrait of newspaper man Edmund Burke Osbourne could provide a lot of decorating bang for the $8,000 to $12,000 estimate. This painting came from the Corcoran Gallery in Washington, DC. It’s a bit disturbing it had stayed in the family until the 1960s until it was donated only to be spun out into the larger collecting public. It would look great hanging in the Tribune Tower in Chicago. 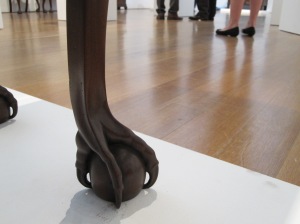 Among the early American furniture at Christie’s is a Rhode Island drop leaf table. Decorative Art Expert John Hays commented that it was solid Mahogany and could be be sold by the pound. A look at one of the claw feet and you may begin to understand why Rhode Island furniture is the most sought after.

A molded horse weather vane is another exceptional object. I don’t know much about these items, but I do know they can sell for a lot of money and I would guess the movement in this one would make it all the more valuable. Lot 50 is estimated at $60,000 to $90,000.

A Philadelphia tall-case clock was another show stopper. The carved rooster gave me the same sense of pride as one of Picasso’s roosters–and contains a similar amount of accuracy–an attribute that somehow makes it twice as wonderful. You’ll have to pay dearly for that pride and glory at the top of your clock. The estimate on lot 117 is $300,000 to $600,000.

The high-priced lot at Christie’s Important American Furniture, Folk Art and Prints sale is the aforementioned clock, followed by a portrait of George Washington at Princeton by Charles Peale Polk, estimated at between $300,000 and $500,0000. In the Fine American Paintings, Drawings and Sculpture sale the high estimate is Midday in the Harbor by Hayley Lever which by estimate could reach $120,000. Possibly a record for this artist.

After a brief stop at Ralph Lauren and Questroyal American Art Galleries–where we saw the newly acquired work by Fitz Henry Lane–it was off to Sotheby’s, from where gallery owner Louis Salerno was returning. I would like to add at this point, that in terms of 19th Century Art there was nothing at either preview that would rival this Fitz Lane painting. 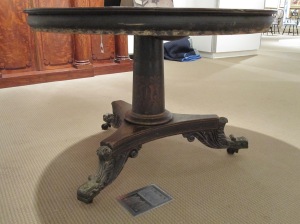 That didn’t keep us from having fun looking. The highlight for us at Sotheby’s may be a Baltimore table in the Empire style that is in poor condition and were it not once owned by President Franklin Delano Roosevelt may not bring much attention or even appear at Sotheby’s. The table was displayed with a photo showing its presence in Roosevelt’s Hyde Park Home. Finding furniture in original condition is one of the pieces of advice given by Hays at Christie’s in their September Bulletin and with missing veneer, trim and other damage, this table would certainly not qualify. But how many parlors have a major item not only owned by a president, but one of the most popular presidents? 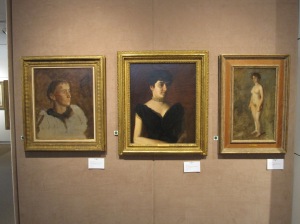 The strength of the fine art of this Sotheby’s sale lies in the portraiture. Not only were there Ammi Phillips’ children portrait works around the gallery, but also three portraits by Thomas Eakins. If William Mason Brown’s delicacy cannot persuade one to buy a still life, Richard Goodwin’s Good Luck at Sotheby’s, with its gigantic size (76 by 40 inches) and trompe l’oeil excellence, will surely capture one’s attention. In case there is no room for such a big size painting, it is already housed in a door-looking frame to replace your mundane door.

A weather vane in the form of Lady Liberty attributed to Cushing and White circa 1865 is estimated to bring $150,000 to $200,000 if the wind is blowing in a favorable direction. A block and shell carved Chippendale desk and bookcase from Rhode Island is the top lot here, estimated to sell for as much as $2 million. The with the high estimate at Sotheby’s is Joseph Henry Sharp’s painting of his studio garden in Taos, New Mexico, which is estimated to fetch between $70,000 and $90,000.