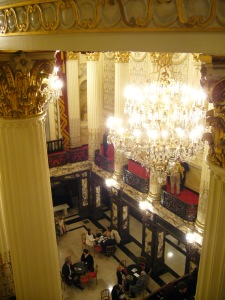 Heinz Hall yesterday was literally sold out yesterday because of the star fiddler Joshua Bell. The concert featured Samuel Barber, John Corigliano and Modest Mussorgsky (orchestrated by Maurice Ravel). The center piece is the concerto “the Red Violin” which enjoyed its Pittsburgh premiere yesterday night.

The new designated principal guest conductor Leonard Slatkin is known an expert for American repertoire, who has left some defining performance for Charles Ives and Aaron Copland. But his control of texture and breadth works the best with Samuel Barber. The second essay for orchestra sounded at once meticulous and intimate. Barber’s immense romanticism and lyricism may sound anachronous in the 30’s and 40’s; yet when people begin to look back from the 21th century, Samuel Barber filled in the position that transitioned the European grand style into American’s own cosmopolitan sound. In the second essay, the melodies were woven with scintillating humorous bursts. The concluding fanfare from the majestic third theme was almost Wagnerian. Under Slatkin’s baton, such climax was both anticipated yet astounding. 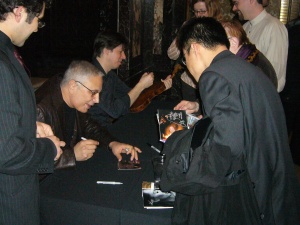 John Corigliano gave a long talk about his works, which although bears the name of the corresponding movie, is much complicated than the original soundtrack. It is true the music in the movie “the Red Violin” was one of the most important elements, but nonetheless the music took a more supportative role while here the music has to stand alone and justify itself.

John Corigliano is a powerful composer. Within 30 minutes, audience can hear different characters, different techniques, different orchestration yet the solo sections themselves would enchant even Paganini. The Anna’s theme slides up the scales and then curls around gently the beautiful melody, almost like yearning. In particular, when such melody reappeared in the third movement, it almost bears an irresistible melancholy as if from a traditional repertoire in the romanticism period.

But in the whole, I felt the opposite. John Corigliano built the skeleton based on the Chaconne structure which takes the lower register from the powerful brass. It swept through the whole orchestra makes the solo violin almost inaudible. His tendency of using percussion (especially those of indefinite pitch) disintegrated the piece into patches, each of which enjoyed its own moment of energy, sweetness or sorrow; yet none can survived in the gulping power of those scorching noise. Even a piano, a celesta and harp were mainly used for percussion effect, which in the end was submerged with the violin sound.

While the second movement was interesting and unique, a fleeting effect with uncommon harmony; the last movement brought the whole piece together. The main racing melody with string crunches started the movement and the initial Chaconne sealed in the end with a wood block. In the middle of the last movement, another romantic melody surfaced up from the solo violin. It was Mahlerian, dream-like sensitive, but again it was only a sparkle, gave in when the modernity poured in. It was at the time that I realize that there is more Charles Ives than Samuel Barber in John Corigiliano’s music.

The second half featured Mussorgsky’s “Pictures at an Exhibition”. The only way that I can think of to link the three works in one night’s program was that they were kind of all composed by gay composers. For the last one, there is more Maurice Ravel than Modest Mussorgsky.

Lawrence Loh said the piece was one of the top 25 most requested classical works, which translated in my mind, should be banned from the performance. Slatkin’s treatment of “the Old Castle” was more restrained, more or less coherent whole way through. But in the end, when drums, timpani, triangle, cymbal all shone out of the orchestra, I was bored and unmoved. The beautiful promenade has been abused and cheaply used.

It was not the sentimentality but the orchestration that failed to impress me. The piano version by Mussorgsky was more suggestive than descriptive; yet Ravel masterful orchestration with sensational usage of brass and wood section leaves no room for brooding. Music should be not commensurate as literature or paintings. It is more abstract, more mind-malleable than any other art form.

In 1958, Richter played Pictures at an Exhibition in the legendary Sofia recital. The piano sound was poorly recorded, not to mention lack of the variety of texture as in the orchestra version. He played the Gnomus with such extreme violence. But such staggering struggle to bring about the anger and the unfair added additional credibility for his performance. True, Ravel brought up condiments, but also he buried down psychological meaning underneath.