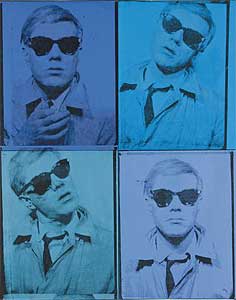 Florence Barron first commissioned Andy Warhol to paint her portrait then changed her mind. Instead she opted for an image of Warhol himself, his first self-portrait made from images taken in a photo booth. She bought it on an installment plan for $1,600 in 1963. When it comes up for auction at Christie’s next month, it could fetch $30 million.

Painted in 1963-1964, Self-Portrait by Andy Warhol marks the first historic crafting of the artist’s iconic image in a photo booth, a radical concept of picture making that revolutionized art history. The four-panel masterpiece executed in four distinct variations of blue, features Warhol for the first time a new guise, that of the enigmatic superstar replete with silver hair, wayfarer sunglasses and a blank expression. It epitomizes Warhol’s desire to be a “machine” and is the perfect portrait of mass media and consumerism. Self-Portrait is a key highlight in Christie’s Post-War and Contemporary Evening Sale in New York on May 11, 2011 and has an estimate of $20,000,000-30,000,000.

Warhol’s visage emblazoned on the Pop masterpiece reflects Warhol’s singular iconic status as the most important artist of the second half of the 20th century. Warhol’s own face is just as recognizable as his Hollywood subjects like Elizabeth Taylor, Marilyn Monroe and Elvis. It is with this painting that Warhol documents his self-transformation into the self-proclaimed High Priest of Pop and the Arbiter of 1960s Cool. His eyes are masked, creating a distance between himself and the viewer and endowing his image with the aloof mystique of celebrity.

According to Brett Gorvy, International Co-Head, Deputy Chairman for Christie’s Post-War and Contemporary Art, “Self-Portrait heralds the beginning of Andy Warhol’s superstardom. With dark sunglasses an oblivious gaze, Warhol was ahead of his time in creating a new archetype of glamour. The painting is remarkable not only for its visual impact and the introduction of the photo booth genre, but for marking a key moment in the history of art, when Warhol takes his place in the pantheon of celebrity; alongside Marilyn, Elizabeth and Elvis.”

This astonishing work has remained in the hands of the Barron family since its creation. It has been the cover image of the catalogues for the major Warhol retrospective at the Museum of Modern Art and the Pompidou Center in 1990 and the Andy Warhol: A Factory exhibition at the Guggenheim Bilbao in 1999.