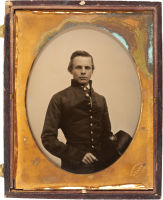 When a circa 1858 Half Plate Ambrotype of Confederate Lt. Colonel John Pelham – known to American Civil War buffs everywhere as “The Gallant Pelham” – comes to auction on June 26 as part of Heritage Auction Galleries Signature Arms, Militaria & Civil War Auction, it will mark the sale of what is possibly the single most famous Civil War photo extant.

Thought to be lost to history for more than a century, it turns out this oft-copied and reproduced likeness – contemporary copies were made from the original before it disappeared – has descended untouched in the Mississippi family of Pelham’s sister Betty, who have decided to auction the piece with Heritage in the hopes that it will go to a collector, or institution, with the means and the facility to take better care of the historic image.

“We’ve had it in our family for probably 80 years,” said Thomas Rogers, Pelham’s great-great grand-nephew and the consignor of the piece. “My mother had it in a fireproof safe at our home and her mother before her probably just kept it in a closet.”

The family was certainly aware of the role their famous ancestor played in Civil War history, and they would occasionally take the photo out to show to close family and friends. Rogers recalls the first time he actually saw the image.

“I could see the uniform, every aspect of it. I was probably 10 or 11 when my mother sat me down and told me all about who he was. After that, in school, I always did well in history because I’d always give reports on Pelham.”

This important and historic offering carries a pre-auction estimate of $65,000+.

“This is, without question, the single most important and visually moving Civil War photographic image I’ve ever had the opportunity to catalog,” said Dennis Lowe, Director of Arms, Militaria and Civil War Auctions at Heritage. “No one in the modern era has ever seen the original of this image until now, though it’s been copied hundreds of times.”

There are few Confederate figures as romanticized and venerated as John Pelham. He was a brilliant leader, a genius tactician and one of the bravest men who ever fought in an American war. Pelham’s confident demeanor in the image, taken by legendary early photographer Matthew Brady in his New York City studio is handsome, verging on arrogance, but it foreshadows the strategic virtuosity and unrivaled bravado that he would eventually show on the early battlefields of the American Civil War.

“What I’d always been told through the years was that he had this picture made to give to his mother prior to him going into the war,” said Rogers, “in case something happened to him she would then at least have a photograph of him.”

In 1861, just weeks short of graduation, Pelham – a native Alabamian – withdrew from West Point to offer his services to the Confederacy. Assigned as a Lieut. of artillery in Joseph E. Johnston’s Army, Pelham’s well drilled battery caught the eye of none other than J.E.B. Stuart, who transformed it into America’s first “horse artillery.” Pelham was thus engaged in every major action of Stuart’s cavalry, from First Bull Run to Kelly’s Ford, where he met his end.

“It is really extraordinary to find such nerve and genius in a mere boy,” said Stonewall Jackson in response to Pelham’s gallantry at Antietam. “With a Pelham on each flank I could whip the world.”

At Fredericksburg, where Pelham’s guns were critical in stemming the Federal advance, Robert E. Lee commended Pelham for his “unflinching courage,” and he is generally recognized today as the most capable commander of “horse artillery” in American military history.

“At Kelly’s Ford, on March 17, 1863, Pelham volunteered to lead a cavalry charge, his artillery not being engaged that day,” said Lowe. “The story goes that Pelham, rising in his stirrups, urged his men to ‘Press forward to glory and victory!’”

During the subsequent assault, Pelham was struck in the head, and mortally wounded. Stuart eulogized Pelham in a general order issued to the Cavalry Division, immortalizing him with the sobriquet “The Gallant Pelham.”

“You will be hard pressed to find a more important and historic offering in the annals of Civil War collecting,” said Lowe. “Pelham is one of the most highly romanticized figures of the entire War Between the States, and here we have the photograph that has, more than anything else, given that immortal aura to this pivotal figure.”

Also of note in the auction to those interested in Pelham is a Pelham-signed letter from Sept. 25, 1858, in which Pelham writes home to his brother in Alabama as he was beginning his studies at West Point. Undoubtedly this letter was written around the same time this legendary picture was taken. This letter is possibly the most important Pelham related document known to the Civil War hobby. It is estimated at $25,000+.